Outgoing Arsenal manager Arsene Wenger insists the Gunners have the quality to fight for silverware next season.

Arsene Wenger believes whoever replaces him as Arsenal manager will inherit a “special” squad capable of challenging for the Premier League title in 2018-19.

Wenger’s 22-year reign is close to ending after his final home game in charge of Arsenal resulted in a 5-0 rout of Burnley at the Emirates Stadium on Sunday.

Asked what he would tell his replacement, Wenger was unwilling to add his voice to the managerial search, though the long-serving Frenchman insisted Arsenal have the ability to move up the table next season.

“I think it’s better I don’t speak publicly about the next manager because I’m not involved in the story,” Wenger told reporters, who paid tribute to the 68-year-old with a bottle of wine following the news conference.

“I do not want to put any pressure on the club to choose this guy or that guy and to give already a handicap to the guy who comes in. It’s not my decision, I’m nothing to do with that.

“I just think he inherits a team that is much better than people think it is. I’m convinced there is a great togetherness in the team, it’s special. With the right conditions this will challenge next season.”

Wenger was in a light-hearted mood after farewelling the Emirates, joking about returning to the stadium to shout at the next manager.

“I would be happy to sit in the North Bank,” Wenger said. “It depends whether I work somewhere else or not. What do I do in the job I do? Will I be free on the days Arsenal plays? I will be happy to be in the North Bank if you can offer me a ticket. If you have one, it would be fantastic.

“The positive of that [being a fan] is that I can shout at the next manager from the North Bank.” 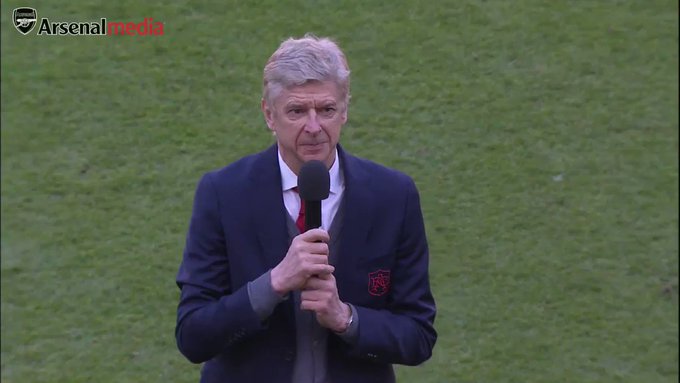 On a more serious note as Wenger reflected on his tenure, the three-time Premier League winner added: “Sometimes, to make people happy you have to go somewhere else.

I wanted to make people happy because I have a certain idea of how football is to be played. My ambition was always to win with style. When you’re a big club I think you have that responsibility and for the supporters to have a special experience when they come to the club.

“That was always my target, and that’s what I mean by making people happy.”