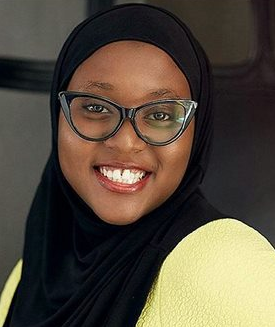 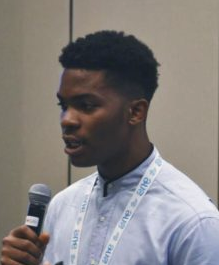 The awards were in honour of the work they are doing to transform lives in their communities.

The Queen was joined at the Award ceremony by the Duke and Duchess of Sussex in recognising their success.

Hauwa Ojeifo: honoured The Queen’s Young Leaders Awards programme, now in its fourth and final year, celebrates the achievements of some of the most exciting young change-makers from across the Commonwealth.This year’s cohort from 38 Commonwealth countries are finding solutions to global issues such as climate change, food scarcity, gender-based violence, mental health, and access to education.

The Duke of Sussex, who was recently named a Commonwealth Youth Ambassador said: “In this rapidly changing world, it is heartening to meet so many inspiring young people gathered here today, who have already stepped up as leaders and improved the lives of so many people across the Commonwealth.

You are the hope and optimism the world needs and we will all do whatever we can to support you in it.” David Beckham OBE said: “I’m so proud to be here with the Queen’s Young Leaders tonight.

It’s really inspiring to meet these hardworking young people, who continue to dedicate their time and energy to helping other people live a better life. Hearing their stories and the sacrifices they’ve made is a real honour and I feel very privileged to celebrate with them today.”

Isaac received his Award for the work he is doing to teach coding to teenagers in low-income areas, founding Teens Can Code which is currently training 200 teenagers how to build web and mobile applications using the same tools that are used by professionals in the tech industry.

Hauwa received her award for the work she is doing to tackle the stigma around mental health, running a women’s support group called She Writes Women, which focuses on mental health support and outreach among some of the most vulnerable people in the community.

Kennedy received his Award for the work he is doing to promote women’s rights in Nigeria, founding the Calabar Youth Council for Women’s Rights (CYCWR), which supports the rights of women in the areas of female genital mutilation (FGM), domestic abuse, forced child marriage and access to education for girls Isaac Ezirim, 28, said: “I am extremely honoured and thankful to Her Majesty The Queen for this prestigious Award in recognition of the work I am doing in Nigeria.

These are moments of utmost happiness for me and the communities I serve. It’s been such an amazing experience being here in the UK and meeting all of the other Award winners.

Being part of the Queen’s Young Leaders family is exciting and I can’t wait to take this to the next level.” Hauwa Ojeifo, 26, said: “It is a rare privilege to receive an Award from Her Majesty The Queen for the work I am doing in mental health in Nigeria.

It has been a completely transformative experience being here in the UK getting mentored by world leaders, trained and engaging in top level meetings with some of the most powerful and influential change makers of our time.

Perhaps the most humbling part is being part of a network of fellow young leaders across the Commonwealth whose knowledge and resource base is far reaching. I can’t wait to see what we do with these valuable connections in the future.” Kennedy Ekezie-Joseph, 20, said: “I am honoured to be a recipient of the final ever Queen’s Young Leaders Award from Her Majesty The Queen.

As a budding global leader, this Award is a huge responsibility for me moving forward to continue to live up to this Award and leverage all the opportunities it presents to develop my society.

I have been able to meet other Award winners and learn about the incredible work they are doing across the Commonwealth. I have learned so much from the Residential Programme in the UK and I am sure that it is only just the beginning.

” As a Queen’s Young Leader, Hauwa, Isaac and Kennedy have gained access to bespoke mentoring and training through the University of Cambridge’s Institute of Continuing Education, designed to develop their leadership skills further and ensure they are best placed to lead the way in the future to tackle some of the world’s most pressing issues.

Sir John Major, Chairman of The Queen Elizabeth Diamond Jubilee Trust said: “I extend my warmest congratulations to all the 2018 Queen’s Young Leaders.

Together with our Award Winners from the last three years, they complete a unique, 240-strong cohort of Young Leaders from all across the Commonwealth.This is such an invaluable resource for the Commonwealth that The Queen Elizabeth Diamond Jubilee Trust will be launching a legacy fund, to ensure that our support and encouragement to our Young Leaders will continue beyond the lifetime of the Trust.

“Each and every one of our 240 Young Leaders is a remarkable and exceptional young person, who I have no doubt will play an important role in shaping our future world.It has been an absolute privilege and delight to get to know them.

” The now complete Queen’s Young Leaders network forms a unique, dedicated and powerful group of young people from 53 Commonwealth countries who will connect, collaborate and change lives together for years to come. To further support them in their future endeavours, a £200,000 Legacy Fund has been created. It will be open to all 240 Queen’s Young Leaders and 282 highly commended runners-up to apply for grants that will help elevate their work and enable them to work together to tackle some of the most pressing issues facing the Commonwealth.

JUST IN!! Oshiomhole Blows Hot, Reveals What Buhari Should Do To Obasanjo Now!