The Nigeria Security and Civil Defence Corps will need N310m to feed and administer drugs to dogs that will be deployed in states for the 2019 elections.

The Nigeria Police Force will also require N7m to feed 50 horses that would be used for patrol during the elections which will take place between February 16 and March 2, 2019.

The information is contained in the 2018 virement proposal sent to the National Assembly for the 2019 general election by President Muhammadu Buhari.

The total police budget for the elections stands at N30.5bn; the Office of the National Security Adviser, N4.2bn; the Department of State Services, N12.2bn; NSCDC, N3.5bn and the Nigeria Immigration Service, N2.6bn.

The balance of N242bn needed to fund the 2019 elections will be captured in next year’s budget.

According to the details of the 2018 virement request the President submitted to the National Assembly, the NSCDC needs N1.2bn this year to prepare for the elections. 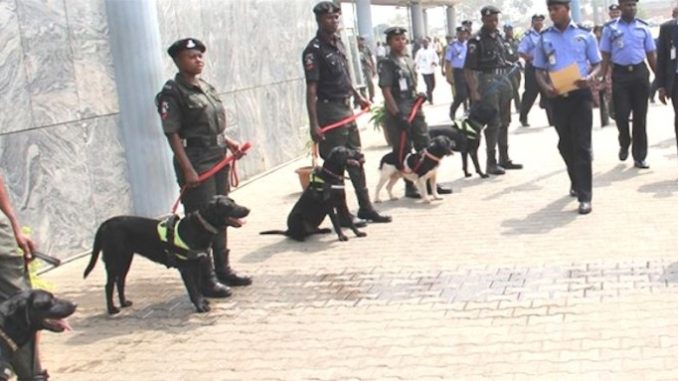 According to the virement document, police election budget this year stands at N679m, with N7.7m earmarked for feeding of horses and N100m for printing of non-security materials.

In the virement details, the NIS also requested N126m for printing name tags for its personnel that would be involved in the elections while N166m was requested for pre-election training.

The DSS, in the virement request would need N2.9bn to prepare for the polls this year.

About N120m was budgeted for fuelling generators during the elections which will last for 21 days while N100m was set aside for post-election investigations.

In the N1.6bn virement details, the ONSA requested N250m for a national election crisis response exercise involving all security agencies and relevant ministries, departments and agencies.

About N200m was budgeted for the deployment of equipment including satellites while N130m was earmarked for election monitoring.

In his letter which was sent to both chambers of the National Assembly, the President said the figures had been subjected to “the usual budget evaluation.”

The breakdown of INEC’s budget was, however, not stated in the proposal sent to the National Assembly.

Speaking with one of our correspondents recently, however, the INEC National Commissioner in charge of Voter Education and Publicity, Prince Solomon Soyebi, had said the commission would require the services of at least one million workers comprising ad hoc workers and INEC employees.

He had also stated that they would all be insured.

Soyebi had stated, “We conduct our elections with many officials. Next year it may be close to a million people. What I want to assure you is that most of the work we do is done by a variety of staff most of whom are ad hoc. INEC has a staff strength of over 16,000.

But two civil society organisations, the Socio-Economic Right and Accountability Project and the Campaign for Democracy, have said the National Assembly must not grant the N229bn virement brought forward by Buhari without seeking clarifications from INEC, the police and other agencies which the funds are earmarked for.

The SERAP Director, Adetokunbo Mumuni, said the agencies to share the virement must be invited by the legislature to justify the appropriation before it would be granted.

Mumuni said, “What is important is for the Senate and the House of Representatives to invite INEC and the other agencies to seek clarifications on the sums in the virement.

“The President has said that this money is meant for INEC and to meet the security needs towards the elections. So the next question is that let us confirm from INEC and the security agencies whether such amounts of money are what they submitted to the Presidency.

“Basically, nothing must be done to frustrate the 2019 electoral process. Whatever is needed to ensure a free, fair and credible election must be provided. But what we kick against is the attempt to use the elections to meet other deliberate fraudulent purposes and intentions.”

Also, the CD President, Usman Abdul, said, “The Senate has a duty to embark on a total scrutiny of the funds before approval. This is to ascertain that there is no misappropriation. The National Assembly must cut down unnecessary expenses to ensure that our funds do not end up in political campaigns for 2019.”

Meanwhile, the Centre for Social Justice has called on the National Assembly to exercise its powers by recalling the bill on the amendment to Sections 81 and 121 of the 1999 constitution which stipulates the time frame for budgets.

The Lead Director, Centre for Social Justice, Eze Onyekpere, said this during a chat with journalists in Abuja.

He said that the bill had been transmitted by the National Assembly to Buhari for over a month, adding that the delay in assenting to the document was an indication that the President was unwilling for it to become a law.

The constitution amendment bill proposes that instead of the old order, where the President and governors present the budget estimates at any time in each financial year, they would now be bound to present same not later than 90 days to the end of the financial year.

The essence of the amendment is to give the legislature adequate time to examine, vet and approve the budget before the end of the presentation year and the beginning of the New Year.

The amendment also proposes a new subsection 1 (a) to the two sections by giving a timeline to the national and state Houses of Assembly to pass the budget for the incoming year before the end of the commencement of the next financial year.

Essentially, budgets will no longer be presented late or approved late like it had happened in the last three years.

The budget will now be ready on or before January 1 of every year.

Onyekpere wondered why a bill that should have checked the incessant delays in the country’s budgeting process had yet to be assented to by the President despite receiving Parliamentary approval.

He said, “If the NASS had given the executive a timeline without prescribing one for itself, the President may

have had a defence for his refusal to assent.

“It could have been argued that both the executive and legislature need to regulate themselves by submitting to a constitutional timeline.

“And it would be considered improper for legislators to exempt themselves from the time frame. In this case, no reasonable person can fathom a reason that makes sense in the company of reasonable Nigerians.”

On how the issue should be resolved, Onyekpere said the lawmakers should veto the president by approving the bill so that it could become law.

He said, “The constitution is clear and requires no further elaboration. It is now up to NASS to exercise its powers for the peace, order and good government of Nigeria and override the presidential veto without any further delay.

“Any other course of action will be a great disservice to the long suffering people of Nigeria.

“Nigerians do not expect that the executive-legislative rift should get in the way of such clear headed amendments.

“There must be irreducible minimum levels of cooperation between the two arms of government, no matter the situation; otherwise the government will need to throw in the towel and call for fresh elections under the doctrine of necessity.”

BREAKING: We Don’t Have Any Patient In Need Of Ventilators In Lagos – Health…

BREAKING:Confusion over curfew as Rivers State government has threatened not to…

BREAKING: We Don’t Have Any Patient In Need Of Ventilators In Lagos – Health Commissioner

BREAKING:Confusion over curfew as Rivers State government has threatened not to re-open sanctioned banks

Revealed:lockdown order is a good thing but stop using soldiers to enforce it – Falana To Buhari

18 hours ago
Prev Next

BREAKING: We Don’t Have Any Patient In Need Of Ventilators In…

BREAKING:Confusion over curfew as Rivers State government has…

Revealed:lockdown order is a good thing but stop using soldiers…